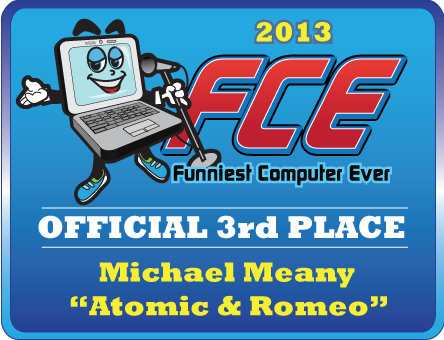 Posted by mmmeany at 4:11 PM No comments:

The competition is on again this year.

Here's a link to the competition launch video.

Posted by mmmeany at 9:17 AM No comments: 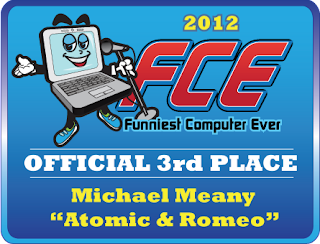 Atomic and Romeo won 3rd Place in the Funniest Computer Ever Competition.

Congratulations to Steve Worswick and Owen Niblock, and to all the contestants.
Also, thanks to Dr Sam Joseph for organizing this truly funny, funky, and engaging event.

Onward and upward for next year.

Well the day has arrived to down tools (for a while). Today (1 November 2012) is the submission day for the Funniest Computer Ever Competition.

Dr. Sam Joseph, the contest organizer, left a comment on this blog suggesting I could enter Atomic and Romeo in the competition. That was a very generous thing for him to do. This really is a Win-Win situation for me. Regardless of how well Atomic and Romeo do in the competition, just the possibility of getting feedback from a field of experts interested in both humour and artificial intelligence is too good an opportunity to miss.

The other 'win' relates to the competition rules and, in particular, the three stages of judging.

Initially Atomic and Romeo were set up as a comedy duo - comedian and feeder (or straight-man, to use the less precise role description). This meant they were developed to perform a sketch on a given topic lasting for 26 interchanges. There is a freedom in this form - the characters can play to each other, generate non-sequiturs that are eventually resolved, and use personality traits to mask moments when knowledge is missing. That will work, I'm hoping, in the Freestyle stage.

The competition stages required me to take their development in a new direction. This was a real bonus. It taught me a lot about my own assumptions about comedy.


1 - I thought jokes would be easier than poetry - wrong, wrong, wrong!
2 - My guys deal in the computational performance of comedy rather than computational construction of humour - this competition forced me to clarify that distinction.
3  - Atomic and Romeo are closer to being human than machines - they are fallible, they don't know everything, they perform following a script, and they don't live up to our overblown expectations of artificial intelligence. This is a crucial understanding. I even wrote a sketch about it.
4 - The “tell me a joke related to X.”and “tell me a funny poem about Y.” structures really forced me to grapple with some of the deeper implications of recursion and random selection in AIML.

So until after the competition results are released they will be no more new versions of the interface or additions to the AIML for Atomic and Romeo.


You can follow the competition at:
Funniest Computer Ever - 2012 - Competition


This is quite a long post (but there is no rule against that).  It seems that Comments in Blogger can't deal with any kind of HTML mark-up (even though it says it can) and they have a limit on the  maximum number of characters in a comment. For these reasons Joe emailed the comments to me. The post contains these emails. They analyze some of the sketches performed by Atomic and Romeo. I thought that this analysis was so remarkably detailed, considered and useful that I asked Joe Velikovsky if he would allow me to post them here. Thankfully he agreed.


Atomic : Romeo are you just going to sit there or are you going to ask something?
Romeo : How about that local sporting team?
Atomic : I have no answer for that.
Romeo : Make a list of everything you don't know.
Atomic : Should I check it twice? (this is a "Santa Claus is coming to town" song/lyric gag, yeah? Made me smile.)
Romeo : Now you're just being perverse!
Atomic : Perverse - how so?
Romeo : If you checked it twice you'd know everything on the list and...
Atomic : I'd have to start again.
Romeo : Exactly.
Atomic : How did you get to be so wise?
Romeo : I grabbed the bull by the horns and the tiger by the tail - and never the other way round. (funny)
Atomic : Good advice for young players. (funny)
Romeo : Have you started on the list yet?
Atomic : Having a little difficulty I must admit.
Romeo : Well you could always invert the problem.
Atomic : Make a list of everything I know - let's call that X.
Romeo : Then make a list of everything there is to know - let's call that Y. (this was a tiny bit odd, it seems they skipped a turn, ie  Romeo should have said "OK...", and then Atomic switched places in the argument, but it didn't really matter, ie - it gives the effect they are thinking ahead of each other/finishing the others sentences/thoughts.)
Atomic : But Y keeps growing.
Romeo : It's what humans do - we make up new stuff all the time. (ie - 'Creativity!'the amount of info/artifacts in the Domain keeps growing exponentially…)
Atomic : That's terrifying, as a ratio of X to Y - I know less now than I did a few minutes ago. (funny)
Romeo : That should make life easier. (this is hilarious)
Atomic : In what universe?
Romeo : You know so little that you could add anything to your list of things you don't know and you'd probably be correct. (funny & clever)
Atomic : And that's a good thing? (funny)
Romeo : Of course, you'd be making terrific progress with very little effort. (funny & clever)
Atomic : Why didn't they teach me any of this stuff in school?
Romeo : They were just training you to work for the man! (subversive! awesome)
Atomic : Which man - are you the man?
Romeo : Our work here is done. (funny!)
Atomic : The Atomic Playboy has left the building - thank you and goodnight.
Romeo : That jumpsuit is a little tight...

Anyway I stopped it there, I think. As I wanted to comment on it all.
Actually the ribbing between them is good, it gives the impression of 2 live humans with chemistry, eg Martin & Lewis.

I will now do another one (another routine), but - I just want to say Mike - how well it seems to have all "come together". (As the Actress said to the Bishop) :)
ie I find it impressive in terms of the comedy writing, the comedy interplay that emerges. ie there is an emergent quality of this, greater than the sum of Atomic and Romeo themselves.
I also see myself as some sort of comedy connuisseir (though I still cant spell it). ie As a fan of comedy, I have "soaked up" loads of comedy over the years...
So - what this chatbot is achieving (in simulating a comedy duo) is quite remarkable to me. (also - having had a little bit of a play with AIML Pandora chatbots myself... My mind boggles somewhat, at what you've done here. ie So, well done.)

Mike - another very good one. Sometimes, it reminds me of /The Big Bang Theory/, a nerd-comedy show which I love.
ie In my opinion, Sheldon could deliver some of the above lines in that show, and it wouldn't seem out of place.
(Also the previous conversation, with all the sci-fi robot / geek humour references, Hal, C3PO, Robbie the Robot etc.
ie I am one of those geeks, so, I find this stuff entertaining/rewarding on several levels.)

Email from JT Velikovsky
Posted by mmmeany at 8:49 AM No comments:


Version 15 actually reverts to the original landscape layout. Some of the users of the interface have experienced problems with the height of the portrait layout. In particular, if they have a small screen size or are running their screen at 800 x 600 resolution, the buttons that allow the user to proceed from the introduction page to the instruction page and, finally, to the interface page are hidden off the screen. This was a sufficiently major user interface issue to require a new version.

All new versions require a considerable amount of testing.  This one I've done as quickly as possible just to get it back out there for more testing and feedback from 'real' people.
Posted by mmmeany at 3:53 PM 1 comment:

What should Romeo say when he doesn't know how to respond?


Occasionally, due to the variable lengths of the sketches I've written, Romeo will be thrown a line he can't respond to. What should he do? The last thing he should do is respond with, "I have no answer for that". That line is reserved for Atomic as a mark of his machine-esque existence.

When Romeo receives a topic he can't reply to he, like Atomic, defaults to his * (star) category. Today I've rewritten his * category so that he will reply with one of the following six randomly generated replies. The

Atomic, you can be so random at times - * really?
Has someone put salt and vinegar on your chips?
You've been dead too long.
* - you're mad as a bag of hammers!
You've derailed my train of thought - why * ?
Sometimes I feel like I'm herding cats.