I have no answer for that.

When Atomic is presented with an input, a "pattern", that is not already matched to an output, a "template", he says "I have no answer for that".

The more I see that line the more I like it. It is mechanistic but tinged with some humanity. It can be understood as its literal meaning (machine-like), or as retort to a witless statement, or as statement of resignation, conceding defeat.

The diagram below illustrates what happens when Atomic's "template" - "I have no answer for that" - becomes a "pattern" for Romeo. Romeo responds to Atomic with a random selection of five possible lines. Each of these lines spurs a unique conversation of some 25 lines.

The fifth option where Romeo says, "That's unlike you Atomic - you always have an answer for everything", causes Atomic to say, "You - you know fuck nothing - me, I know fuck all!". When this line is thrown to Romeo, he responds with one of a new set of five random lines. Again, each of these lines spurs a unique conversation of some 25 lines.

Why give Atomic's crude line such weight? First, as the comedian of the team he needs catch-phrases, generic things to say that are in some way ambiguous or oblique. Second, it is a line from Atomic's back-story, this allowed me to put some character exposition into the 'lost spaces' of unmatched patterns. Finally, it's funny - it's got good structure, good repetition of strong 'k' sounds. 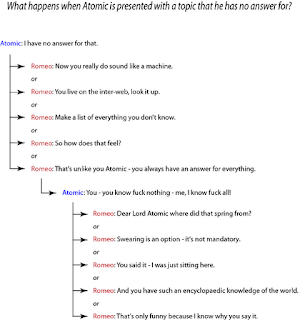 You can click on the picture to see a larger scale version.
Posted by Unknown at 1:34 PM