Which way to handle the brains

Part of the work I've been doing over the past couple of week has been devoted to planning how to get the bots to talk to each other.

Option 1: This involves using two web servers, one for each character. Each would have a version of the Alicebot 'engine' (ProgramD version or Charliebot) and have its own AIML set. The timing of the interchanges would be controlled through a Flash interface.

This calls for only one instance of the Alicebot 'engine' and uses the Flash interface to swap from one AIML set to the other. Both Dick and Detail Boy share the 'engine' but the outputs would be predicated on which 'mind' is being used.
At the moment, this sounds the most practical. 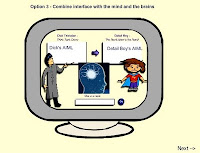 Option 3: I had a brief infatuation with the idea of creating a version of the 'engine' entirely in Flash in Actionscript 3.0. This would have allowed the greatest flexibility but would have soon become a programing and management nightmare. A colleague talked me out of it - thanks to Dr Keith Nesbitt.


In later posts I'm going to explain why I've chosen to base my work on the Alicebot 'engine' and AIML rather than other chatbot structures.
Posted by Unknown at 6:36 PM